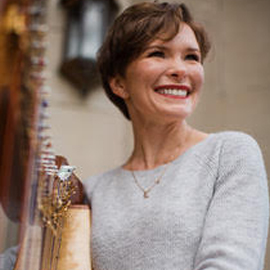 Making her home in Central Pennsylvania, Mary-Kate Spring Lee is an award-winning harpist and pianist with over 20 years of experience. She performs often both as a soloist and with her acclaimed Celtic Nu-Folk Band, Seasons.

Mary-Kate has won the Mid-Atlantic Celtic music competition (the Fleadh) twice on Celtic Harp, as well as placing 3rd in the Senior vocal competition. She has also competed twice in Ireland at the All-Ireland Fleadh. Mary-Kate is also a multiple-time recipient of the Knot’s “Best of Weddings” Award, The Knot Hall of Fame, and Wedding Wire’s “Brides’ Choice” award.

Mary-Kate has performed at a wide variety of venues, including the Pennsylvania Renaissance Faire as “Harper Lee” The PA State Capitol Rotunda, The McLean Celtic Festival, The National Apple Harvest Festival, The Bethlehem Music Festival, The Kutztown Folk Festival, and many more.

In addition to playing the harp, Mary-Kate is one of the primary songwriters and vocalists for Seasons, also playing concertina and penny whistle in this capacity. She also appears several times a year as a member of the Harrisburg Harp Orchestra.

Mary-Kate has recorded multiple albums both as a soloist and with Seasons that have been reviewed and played on national publications and radio stations, including Christianity Today, Folklife Magazine, Irish Music Magazine, Thunder on the Plains, WJTL and more. Mary-Kate has appeared on the television show “Life on the Rock” on EWTN with her band Seasons, which features her brothers and sisters on harp, hammered dulcimer, violin, Irish drum, and more.

In addition her performing schedule, Mary-Kate also maintains a teaching studio with students on the harp, hammered dulcimer and piano, and loves having the opportunity to share her experience with the next generation (or adults who have always dreamed of playing)!

Piano and Harp Lessons with Mary-Kate include:

Piano: Use of the Bastien Piano Method, including accompanying theory books and note flash cards

Harp: Instruction books may include Colorful Adventures on the Harp, Teach Yourself to Play the Folk Harp, Harp Exercises for Agility and Speed, others depending on the interests and level of the student

For all instruments Mary-Kate is also an advocate of familiarizing students with ear learning and also working from chord charts. She will also incorporate hymns, pop songs, etc. that the student expresses an interest in learning on his or her instrument.